Netanyahu - Mufti Kerfuffle: Ask Yourself Why Doves are Enraged

Here is what you need to know about Amin Husseini.

He was born in 1895 and died in 1974. He was appointed Grand Mufti of Jerusalem by the British Mandate authorities.

And, he is infamous in Jewish history as a collaborator with the Nazis.

He was a proponent of militant violence against Jews and against any Arabs who were willing to make peace with the Zionist enterprise.

When WWII broke out he made his headquarters in Iraq and tried to establish a pro-Nazi regime there. When that didn't work out, he moved to Italy (an Axis power) and then to Germany.

He openly supported the Final Solution – this is not in doubt.

He helped the Nazis set up Bosnian-Muslim Waffen-SS battalions. He lobbied the Nazis to bomb Tel Aviv and to extend the net of the Holocaust to Sephardi Jews in Arab lands.

He vehemently opposed any tactical deals ("trucks for Jews," etc) that would have even temporarily spared Jewish lives. 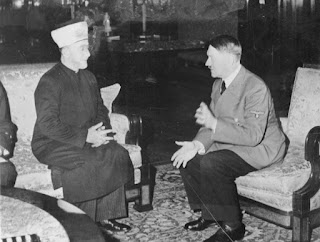 After the war he was welcomed and given refuge by Nasser in Egypt.

Here's what the PM said:

"...And this attack and other attacks on the Jewish community in 1920, 1921, 1929, were instigated by a call of the Mufti of Jerusalem Haj Amin al-Husseini, who was later sought for war crimes in the Nuremberg trials because he had a central role in fomenting the final solution.

"He flew to Berlin. Hitler didn’t want to exterminate the Jews at the time, he wanted to expel the Jews.

And Haj Amin al-Husseini went to Hitler and said, "If you expel them, they'll all come here." "So what should I do with them?" he asked. He said, "Burn them."

Now, the point of the reference to the Mufti is that he was among the first to claim that the Jews wanted to destroy al-Aksa mosque.

Netanyahu did not say that the Mufti convinced Hitler to annihilate the Jews.

It is simply true that as the destruction of European Jewry evolved from 1933 until 1945 the Nazis tried different approaches to solving the "Jewish problem."

And yes, there was a stage when in parallel to killing Jews haphazardly (clubbing, shooting, etc) and well before the industrial destruction had been perfected, the Nazis did consider expulsion.

According to Joseph Schechtman's The Mufti and the Fuehrer, the mufti began his outreach to the Nazis on July 21, 1937 via the German cousul in Jerusalem.

Keep in mind that at the time, the Nazis still had hopes to keep Britain out of any war so didn't want to rock the boat in British-controlled Palestine.

Nonetheless, the mufti sent an agent to Berlin to lobby the Nazis.

In fact, Adolph Eichmann was dispatched to Palestine to study the situation in response to the Mufti's lobbying efforts.  He was also in contact with Husseini.

Actually, there is some evidence that already in 1936, the Nazis were helping the Arabs in Palestine.

Obviously, there is much more to be said about the Mufti and the Nazis.

(1) The claim that the Jews want to change the status quo on the Temple Mount dates back at least to the Mufti's days.

(2) The fierce criticism by dovish Jewish journalists, pundits, and politicians (and of course the foreign media and the Arabs) of Netanyahu is intended to undermine his not-so-subtle implication that Arab intentions then and now are much the same.

That is the crux of the issue.

If you believe the conflict is about boundaries and settlements then you want to play down the extraordinary consistency of Arab intentions.

So if you think that Hamas, Islamic Jihad, and Fatah are not disciples of the mufti's values then you need to be offended by Netanyahu's efforts to link the Nazis to the Palestinian cause. Of course, you also need to keep your eyes tightly closed.

-------
Dept of Correction. I mistakenly wrote Netanyahu's speech was at the World Jewish Congress when I meant the World Zionist Congress.

Elliot Jager
In my lectures, I aim to contextualize Israeli politics and society. In my editing, I work to make your writing clear and compelling.

Ruchie Avital said...
This comment has been removed by a blog administrator.
2:39 PM

Richard said...
This comment has been removed by a blog administrator.
5:43 PM

SabaShimon said...
This comment has been removed by a blog administrator.
4:03 PM

REQUEST A ZOOM BRIEFING or INVITE ME TO SPEAK